The interview discusses her work in Personal Structures, Venice 2011 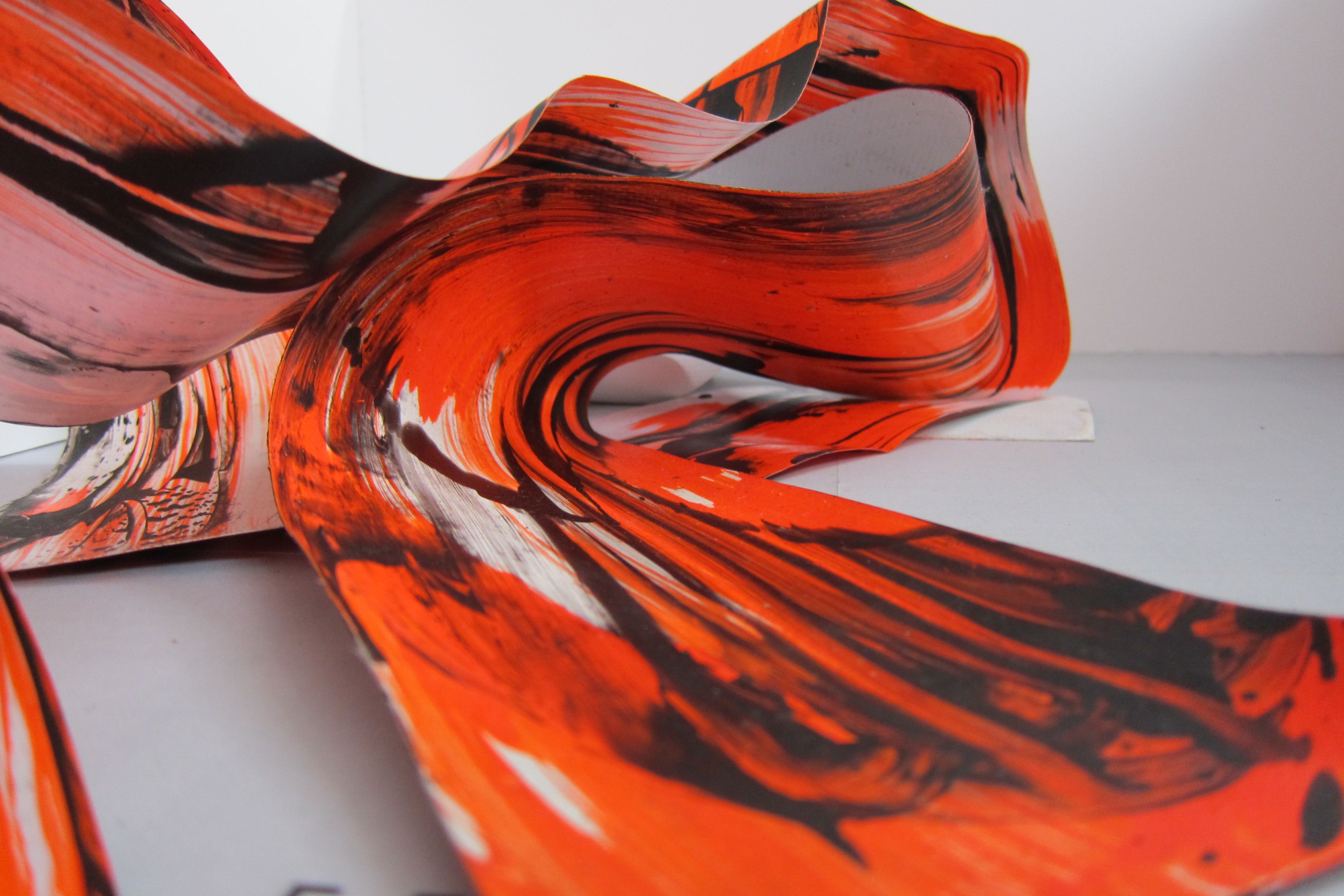 Judy Millar: For this exhibition, I’ve been given a small room with two beautiful windows, which open out onto a canal. I’m making a twosided painting that forms a big springy strip. The room is about 6m long but the painting is 20m long. Since the painting is too big for the space, there’ll be a tussle. The painting will be forced to lift itself up into the air, go out of the window, and come back in. It’ll double back on itself and loop around. It’ll be delicate but cumbersome, a physical gesture in real space but also a bearer of illusionistic painterly space.

Robert Leonard: You’ve been blowing up “the brushstroke” for a while now.

JM: It started with Giraffe-Bottle-Gun, my 2009 Venice Biennale show. I made small paintings, then enlarged the imagery to ten times the size. I used a billboard printer—an advertising tool—to do it. I wanted the work to advertise itself. I wanted to amplify everything.

RL: But the new work is painted, right?

JM: The orange bits are painted but the black bits are printed. Both have been up-scaled, but to different degrees and in different ways. I’ve been developing big brushes with multiple heads so that I can make giant gestures. I’m trying to find a bigger dimension for myself.

RL: With the up-scaling and the use of printing, are you trying to denature or dehumanise the brushstroke?

JM: I’m not trying to dehumanise it, if anything I’m trying to rehuman ise it. I’m trying to give it more authority. Despite the absurd scale, you still read the work through your body.

JM: Exactly, it’s gesture in real space that carries other gestures on its surface. The illusionistic surface distorts your sense of the real physical form, and vice versa. By manipulating the support structure itself, I’m dismantling the usual image/support hierarchy.

RL: I’m reminded of the plastic toy-car track that I had as a child. I would bend it into curves and loops and send my cars careering down it. Your support will operate as a track for vision.

JM: The eye is forced to follow the track. I can control the eye; slow it down on the curves and speed it up on the flat. Space will turn into time, and time into space. What was behind will suddenly be in front, edges will become lines and lines will become edges— everything will be turned inside-out.

RL: Because they are so antithetical, I was reminded of Lynda Benglis’s paint pours from the late 1960s. She let paint fall from the can onto the floor, whereas your piece is perky, springy, alert. It isn’t paintdoing- what-comes-naturally.

JM: I’ve never been one of those materialists who think paint is more interesting in the can. For me, painting is not about paint, or even about paint on a support. For me, it is about structures: illusionistic structures, logical structures, worldly structures, all sorts of structures. I’m not interested in paint simply as a material.

RL: So why paint?

JM: I stay interested in painting: it’s a way of collapsing the separation of the mental and the bodily that I experience in so many other parts of life.

RL: So, you’re affirming rather than critiquing painting.

JM: I’m questioning and hopeful. I’m asking what can painting still say, and hopeful that it can still say something.

Robert Leonard is Director of the Institute of Modern Art, Brisbane.