The Sinew of Space

An essay by Jodie Dalgleish for Contemporary Hum on Judy Millar’s 2017 exhibition “Swallowed in Space” at Galerie Mark Mueller, Zurich.

The Sinew of Space

It’s frustrating to her, Judy Millar tells me from the West Coast of Auckland as we discuss her exhibition in Zurich, Swallowed in Space, that people are so rarely asking ‘what does painting do to us?’. An affective painting, after all, is something we want to go and see, and revisit, and make part of our wider experience. I wholeheartedly agree with her, especially after having just travelled to see her work (from my current home in Luxembourg) and encountering the way it not only activates space but also allows the kind of ‘space creation’ current in philosophy, cultural geography and advanced architectural research. 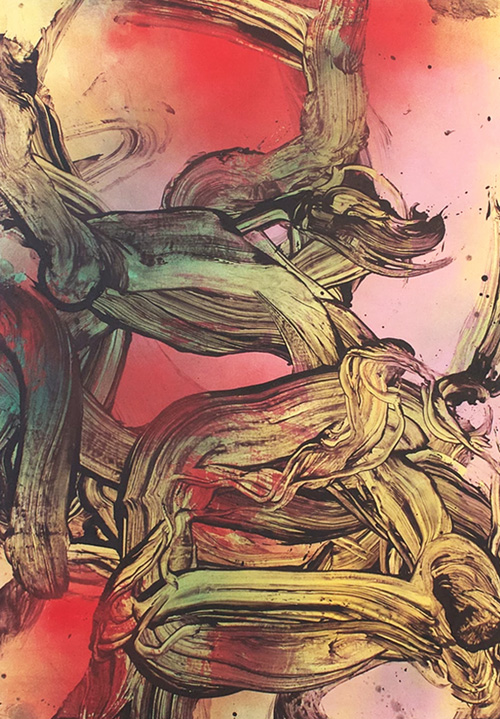 Engrossed in the exhibition’s spatial effect, I begin to realise that I am naturally embodying the paintings’ own quest for, and questioning of, modes of movement. Each painting is an intense material object based on movement, while it is also a container that circulates and throws me more broadly into an exploration of the space that emanates from it. ‘Space’ here, is a body-dwelt ‘imaginal’ field. It is the field projected from the body into a ‘spacious view’ of the ‘increasing inclusiveness’ of its expanding boundaries, as philosopher Edward Casey writes of place that has become more spacious in Western thought. In this kind of space, Casey writes, ‘expanding envelopments’ are all linked by the organic body and its history in the ‘fuller compass’ of what is happening, and at stake, in and from a particular place. 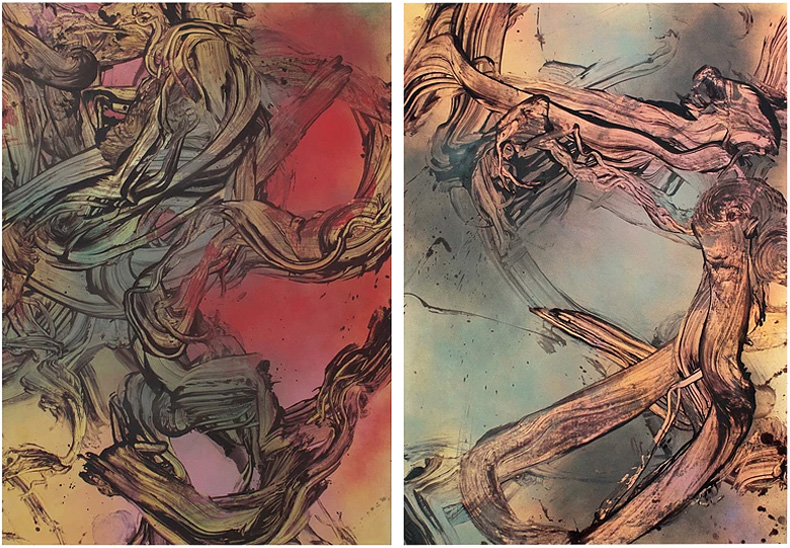 Essential to my experience, is the fact that each painting’s sinuous forms continue in striated bands that curve, twist, turn and loop seemingly without end. As I follow them, they always release their coiled directions onwards, even if only through a series of drips, a finger drag or the suggestion of an aspirating colour. They are not brushstrokes, but rather a skilfully indeterminate ‘caricature,’ or parody, of such a singular gesture. Their banding is almost collographic in nature: a result of the artist’s characteristic mark making that accumulates the positive and negative impressions of paint in the push and drag of objects across the painting’s surface. ‘I was trying to think of something like a very big fingertip,’ the artist tells me as she describes the way in which she slid differently-sized bags filled with sand through the paint. They allowed complex forms of movement, she explains, ‘and they have this particular feeling.’ For me, their form is fibrous, elemental and constant, like bands of tendon, muscle fibres, the phloem tissue of bark, and the cellulose cordage of plants. They seem to hold painting and movement together. – Excerpt from the article written by Jodie Dalgleish.